As you’ll have gathered from this blog, a good number of our students opt to apply for English Language Assistantships every year, whether between their 2nd and 3rd years or as graduates. For the past few years, some of our ELA students have also participated in SCILT’s ‘Language Linking, Global Thinking’ scheme during their year as assistants and we thought it’d be good to get a sense of what this actually involves – from the perspective of the students involved – so here goes, with thanks to Laura who has just finished her time as an assistant and will be coming back to Stirling in the Autumn:

‘I am a Primary Education student at Stirling. I came to university straight from school. However, I had always wanted more life experience before beginning teaching. This was one of my main motivations for applying to work for the British Council. Teaching within the central belt of Scotland makes classrooms greatly diverse spaces with many nationalities, languages, experiences and backgrounds. Living abroad would not only enable me to better encourage modern language teaching, but also relate more to the experiences of many of my students in my future career.

Over the summer last year, the Languages department at Stirling University made me aware of an additional project I could take part in during my post abroad. This was called “Language linking, global thinking” and it involves a partnership between a British Council language assistant and a primary school. Throughout my year abroad, I would remain in contact with Doune Primary through an online blogging forum. 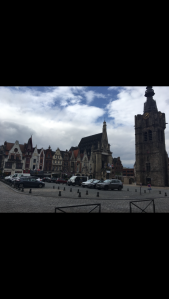 Before beginning my post as a language assistant, I had only been to France twice. The first time was when I was 10 for a weekend in Paris with my family, and secondly a week skiing with my high school. This meant I had very little knowledge of what “normal” life would be like in France. I come from Edinburgh – a highly touristic, young, affluent city. This meant arriving in the northern region of France was a very different experience. I arrived alone, with very poor comprehension of informal French speaking leaving me feeling confused and isolated. I was an English language assistant in a very small village called Labeuvrière which was just outside of another town where I lived named Béthune. The history of the region is a difficult one and now it is left with a high unemployment rate and listed as the poorest region in France.

In Béthune, the level of English was extremely poor. I soon realised how much safety I had felt in university French classes knowing that everyone in the room would be able to help me with an English translation if it was needed. The first few months without this comfort blanket were a steep learning curve for me. Despite my initial fears, I now feel that living in Béthune gave me a more honest understanding of what it means to be in France today. Being far away from the more glamourous, touristic image of France was key in drastically improving my French and understanding for the challenges of 21st century French society.

I had never fully appreciated how much I relied on the subtleties of language to present myself and my personality. Specifically, how I use humour to make friends, and how I can unconsciously use tone to get across the subtleties of my meanings. I felt unfunny, unintelligent and personality-less in French. Even as my comprehension improved, I was still not feeling like me. This was a challenge I was unprepared for, but so important now in my appreciation of anyone I meet in Scotland who Is speaking English as an additional language. Now, I feel the key piece of advice I can give to anyone else venturing abroad to speak a second language is to prepare to feel unprepared. After January time I began to use different ways to get across meanings and make connections with people. 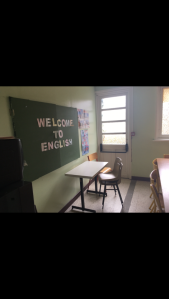 I was hugely lucky with my school. Being placed in a primary school was far more challenging on my French, but I had amazingly supportive teachers who were patient with my language development. As the English level in the school was very poor, this meant I wanted to make English fun and relevant to their lives. Throughout the year we created our own “Highland games”, drama pieces, baking and parties. The children loved learning about my home, family and country. English lessons were always about more than just the language, they were about making connections and thinking beyond the small perspective of the village. For the children in Labeuvrière, many had never been abroad, or left the region. (This was particularly eye opening to me as the Belgian border was less than 30 minutes away). The children’s exposure to a language assistant massively helped their awareness of what it means to live abroad, and what it means to make deeper, more worldly connections beyond the constraints of monolingualism. This extends their world view and what language learning can do for them from a cultural, lifelong perspective.

I truly think it that the Scottish education system is missing a great opportunity for children to develop their deeper cultural knowledge and understanding. This is why – when it is not possible to have language assistants from abroad – projects such as LLGT are so successful. A class being able to follow an assistant and their experiences is a means of getting across these important ideas. With Doune Primary School, I was able to write to them first hand showing my experiences visiting in person the WW1 trenches, the Vimy ridge. I was able to show them the photos I took on my tours around the Belgian Christmas markets. Perhaps, most interesting was when the children were able to see the comparisons between the hugely different French schools and resources. Once I had returned to Doune Primary, we debated and discussed together the similarities and differences between the education systems.

“Language and culture are the frameworks through which humans experience, communicate, and understand reality”.

A connection with a language assistant is a means of acknowledging the challenges which come from learning a second language and recognising cultural differences. However, crucially, it also acts as an opportunity to explore the many positives and life-changing impacts of travel, adventure and making greater human connections. It really is linking what we have in common, to a better, global way of thinking. Everyone can benefit from this.’

Many, many thanks to Laura for taking the time to send us this blog post and we look forward to welcoming you back to Stirling in the Autumn.