Looking forward to semester starting again next week after our break and, in particular, to setting to work on the dossier on ‘Film and Childhood’ we’re editing for the undergraduate film journal Film Matters. Students from Literature and Languages, but also from many other parts of the University, will be contributing to the dossier, writing articles on films as diverse as Etre et avoir, Atonement, Interstellar and La Vita è bella.

The dossier is being edited by Cristina Johnston and students will also have the chance to get feedback and advice from colleagues across Literature and Languages and Communications, Media and Culture who work on a range of aspects of cinema.

We’re really pleased, too, to have the support of our honorary graduate from last year, film director, curator and author Mark Cousins. As well as his work with Tilda Swinton on the 8 ½ Foundation, Mark has also curated a series of films on childhood (screening again this year at Edinburgh’s Filmhouse Cinema) and has directed two films about children (A Story of Children and Film and The First Movie). Mark will be coming to Stirling on 5 March to talk to the dossier’s authors about cinema and childhood. In the meantime, you can read his great article on teaching film here!

And we will, of course, keep you updated with progress on the dossier via the French at Stirling blog.

The mid-semester break is about to start here at Stirling and, next week, some of our students will be in Glasgow, watching the recording of a new French-language quiz show. I hope to be able to post tales of the recording after the break but, in the meantime, I wanted to add an account of a trip undertaken by a group of our students with our Language Assistant, Brigitte Depret, at the end of last year. With thanks to Brigitte for sending this, and to Nadine Wall (one of the students) for the photo! 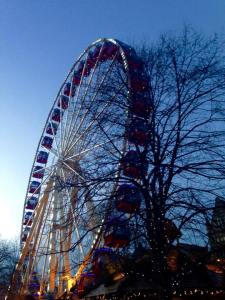 “In December 2014 some of the first and second year students studying French were given the chance to take part in a day out in beautiful Edinburgh, courtesy of French at Stirling who had offered free tickets to go and see a movie during the annual French Film Festival.

We went to the Dominion Cinema, one of the oldest in Edinburgh, first opened in January 1938. If you ever want to go and watch a film somewhere that you really feel at home, this is definitely the place to go. With its comfortable individual sofas, footstools and side tables, the students fully enjoyed the cosiness of the venue where we were offered wine and food tasting from Provence, prior to the screening. Indeed, it was all about Provence!

I will not dwell on too much on the film we saw on that day: Our Summer in Provence (2014). Sadly, the latter was not the perfect example of the French grand cinéma, rather, a family-friendly entertainment that swung in between drama and comedy. The plot was quite thin. Luckily, we had the beautiful sceneries of Provence to make up for too many low-grade shenanigans, and, of course,  the subtitles for my students who were delighted to have grasped some of the ‘finest’ French expressions.

When watching the movie, I couldn’t help but thinking I had spent almost two decades near the very place where the film was shot. The smell of Provence, the heat of the summer, the markets, the cicadas… but also I thought about some words (even if now some came up distorted), Provence gave to the English language (one of our many gifts that contributed to the rising of the English language as the Lingua Franca).

Did you know the word amour used in middle English and found now in the expression amour propre, comes from Old Provençal? And speaking about amour could you imagine a cavalier back from a croisade (crusade) who would sing a ballade (ballad) for you.? Then he would invite you to a picnic, offering you a salade (salad) seasoned with a nois muguede (nutmeg) to spice up your al fresco lunch. Oh, and why not add a delicate truffe (truffle) whilst we are at it? Wouldn’t you like too, the taste of a juicy figue (fig), sitting in the shade sheltered from the sun and finish up with a fine nougat?

Moving on in time you could even imagine listening to a fidgeting Harlequin or a troubadour singing some sonnet especially for you. How nice!

And in our modern era you may enjoy being whisked away in a limousine sitting next to a French man wearing a beret, telling you stories or could it be a clever charade? He would stop at a boutique and buy you an expensive parfum (perfume) and why not a ring? In his beautiful lingo (lingua), he would propose and you would say OUI!

And then on your way to your honey moon, the lovely cabine (cabin) on the boat will feel like the sweetest cocon (cocoon) ever. There, in a foreign land you will buy a mascotte (mascot) that will become your precious beloved good-luck charm.

The lingo (lingua) apparently lived happily ever after…”

More news about talks and events French at Stirling staff are involved with over the coming months… David Murphy has been invited to speak at a Study Day at Nottingham, organised by Alec Hargreaves, the theme for which is ‘Still French? France and the Challenge of Diversity, 1985-2015.’ David has also been invited to speak as part of Edinburgh University’s Diasporic Trajectories seminar series in November 2015 and has just launched the Call for Papers for a conference he’s co-organising at FSU in October 2016.

More to follow on this shortly but we’re delighted to announce that we’ve established a partnership with one of our local primary schools (Braehead Primary in Stirling) which means that, starting from this year, one of our students during their time abroad (whether Study Abroad or assistantship) will keep in touch with Braehead’s Primary 5 pupils to tell them all about their experiences in France. We’re particularly pleased that the first Stirling student to be working with us on this partnership, Emma Goodall-Copestake, also happens to be the first student we’re sending to our new partner institution, the Université Blaise Pascal in Clermont-Ferrand.

The partnership came about through conversations between Fiona Buckland in our International Office, French Programme Director Cristina Johnston and Jean-Michel DesJacques, our French Language Coordinator, and Braehead teacher Christopher French, and we’re looking forward to seeing how it develops over the months and years ahead. Pupils at the school are extremely excited about the project and, for Christopher French, offering the opportunity for students to share their experience of studying abroad with the classes will enhance our pupils’ awareness of daily life in France and French culture. Introducing new perspectives and enhancing the children’s knowledge of language in practice as a relevant and contextual skill is a key aim of the link up from our perspective. We were very excited to meet Emma and are looking forward to sending her our questions and Skyping her to see how she is getting on.’

Great seminar yesterday, in the weekly (more or less!) Literature and Languages series, given by Nikolaj Lübecker of St John’s College Oxford on ‘The Feel-Bad Comedy: Bruno Dumont’s P’tit Quinquin (2014).’ Nikolaj’s book on feel-bad cinema will be out with Edinburgh University Press later this year and includes analysis of key films by directors including Dumont, Lars von Trier, Michael Haneke and Gus Van Sant. You can hear a talk by Nikolaj on this subject here.

More French and Francophone-themed talks coming up in the series over coming weeks from Guy Austin (on Algerian documentary cinema), Tom Conley (in Stirling as the inaugural Society for French Studies Visiting Fellow) and our own Fiona Barclay (on melancholy, depression and the colonizing of the pieds-noirs) and current PhD student Mauro di Lullo (on Blanchot).