One final blog post before switching off for the holidays and a few bits and pieces to catch up with from end of semester activities. So, in no particular order…

Many congratulations to former French at Stirling PhD student Stefanie van de Peer whose edited collection Animation in the Middle East will be out very soon with IB Tauris and promises to be a great new addition to the field of Animation Studies. We’ll be ordering it for Stirling University Library, of course! 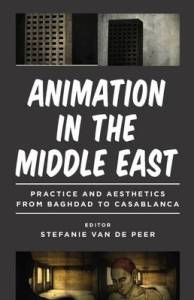 And thanks to the group of French at Stirling undergraduates who found the time to go to Graeme High School in Falkirk to talk to pupils there about the opportunities that open up through the study of languages. Our Language Coordinator, Jean-Michel DesJacques, organises our Student Ambassador scheme which, as he says, “relies entirely on the good will of students who, given the opportunity, are keen to share their love for languages. No-one is better placed to reach out to pupils who might never have considered pursuing with a language at school, or who might think that the sole purpose of studying a language is to become a teacher. We are very fortunate at Stirling to have a combination of volunteers that includes people with prolonged experience abroad and even native speakers. This is also the result of good relations and collaboration between the University and local authorities.” This visit to Graeme High follows on from an equally successful visit to Wallace High earlier in the semester and we were particularly pleased to get one of our visiting Erasmus students involved with the December visit.

Thanks also to the colleagues and postgrads who came along to Cristina Johnston and Charlotte Lange’s Study Day on crime fiction earlier in December, and to those who attended the public reading and Q&A the same evening with leading Scottish crime fiction author Craig Russell. The papers presented during the day included one by Cristina Johnston on the hit French crime series Engrenages and a paper by Charlotte Lange on Mexican crime novels, as well as contributions from our colleague in Creative Writing, Liam Bell, talking about Malta as crime scene in his next novel, Creative Writing PhD student Lorna Hill who spoke about invisible victims and Ailsa Peate (University of Liverpool) on Cuban crime fiction. Miriam Owen – a former postgrad on our Publishing Studies programme – was also on hand to screen her short documentary about the Iceland Noir book festival.

Plenty to look forward to in the Spring, too, with a visit from our colleague Lucie Herbreteau from Angers who will be teaching some classes on our final semester core language module while she is in Stirling. And we’re looking forward to welcoming back Bill Marshall after his semester’s research leave which has – most recently – included a plenary on ‘Queering Guyane’ at the ‘Imagining the Guyanas/Across the Disciplines’ conference hosted by the Université Paul Valéry-Montpellier III. 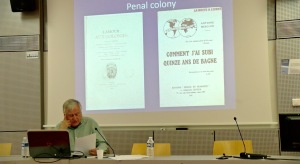 In the meantime, though, the University is about to close for the break and we wish you all de joyeuses fêtes!