As ever, with the rush of the final weeks of semester, the blog has gone a little quiet but the sun has just come out over Stirling’s campus and that seems like a good time and a good reason to quickly try to catch up on things blog-related. By way of a starting point, it’s great to be able to share some good news about funding successes for colleagues in French at Stirling.

Building on the success of a similar event we organised back in June 2017, we’re currently in the midst of organising an event for secondary school pupils that’ll take place on campus in a couple of months. More will follow on that soon but we were delighted to hear, just a few days ago, that Cristina Johnston has been awarded funding through the ASMCF School’s Liaison and Outreach Fund to support some of the activities we have planned for that event. Watch this space for more details and thanks to the ASMCF for their support.

And our other piece of fantastic funding news is that Fiona Barclay has been awarded a grant through the Stirling Fund to create a micro-website as part of the University website that will enable staff and students who are interested in learning and practising another language to get in touch with each other. In essence, users will create a profile stating which language they are looking to learn, and which native language they are offering. They can then use private messaging to contact other users whose profiles match what they are looking for. It’s aimed at helping Stirling students to build confidence and language ability, and also at helping visiting students to integrate and get to know UK students. The website is due to launch in September so, again, keep checking the blog for updates and congratulations to all concerned! 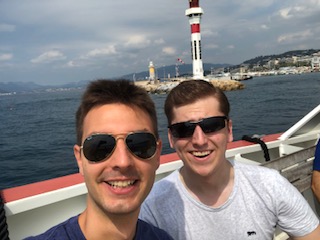 The previous post about this year’s applicants for the Stevenson Exchange Scholarships, reminded me that I still had one other article lurking in my files, waiting to be posted, about a French at Stirling student’s success. In this instance, the scholarship in question is the University of Stirling’s Williamson Travel Scholarship which, last year, was awarded to Stefano, currently in the final semester of his degree in International Politics and Languages, along with his fellow student Christopher. Their joint research project was entitled ‘(Dis)integration in Southern Europe. A comparative observation of integration practices for migrants in Italy and France.’

Stefano and Christopher used the research they conducted under the auspices of their project to observe perceptions towards integration of migrants in two different European countries, namely Italy and France, through on field observations of integration practices at both local and regional level. Last July, they made use of their scholarship to spend two weeks in Southern Europe to carry out a comparative review of approaches to integration between two neighbouring countries which have been dealing with an increase of migrants in recent years, in order to enhance their understanding of the ways these countries can foster the integration of migrants in their societies. As well as examining national media representations of ‘the migrant question’, they also made contact with local civil servants and representatives of NGOs to further their knowledge and understanding of the situation. For example, they interviewed Dr Stefano Pasta, Adjunct Research Fellow at the Catholic University of Milan (Research Centre for Intercultural Relations), Journalist and senior volunteer at the Community of Sant’Egidio, a leading international NGO founded in Italy to support and integrate foreigners and migrants in Europe.

In their report on the project, Stefano and Christopher explained that having had the possibility to spend time in two European countries which have both been affected by the arrival of migrants since the start of the humanitarian crisis in 2015, ‘it has been deeply interesting to further investigate their different approaches and attitudes towards migration and subsequent integration within their societies’ and they hope their research will foster ‘awareness of the necessity for an ever greater deal of solidarity and cultural understanding in order for all of us to be oriented by the inspiring examples encountered along the journey.’ And they are, of course, grateful to the Williamson Trust for its trust in them and for its financial support through the scholarship.

Many thanks to Stefano for sending us the information about this project and for his patience while the article somehow sat in an email folder waiting to be posted!