Following on from Brett’s tales of life in Japan, more travelling French at Stirling adventures, this time courtesy of this great post from Stuart who has spent the past academic year working as an English Language Assistant in Québec:

‘Salut tout le monde! It’s been a while now since my last post which, as you know, has been due to working as an English Language Assistant on the other side of the Atlantic Ocean in Québec, one of the last bastions of French in North America. With my nine months there over now, I’m excited to share a little bit about my experience with you.

First off, I want to address the elephant in the room here. Yes, les québecois do have a very different accent to the French we’re used to hearing in a European context. At the beginning this can be a major shock to the system and can leave you in situations like when, in the very first week, I had a 20-minute conversation with an elderly bus driver where I understood about 10% of what he was saying! However, by the end of the nine months, your ear starts to tune into it far better and you can feel yourself starting to accept the things they say and even repeat them without even thinking about it (those of you in my conversation classes next year will have this challenge to look forward to!).

When I was anxiously awaiting news of my placement in Québec last year, I had a few people tell me that it might be a detriment to my French dealing with the accent and all the slang (this ended up encouraging me more as I am rather stubborn!). I’ve since found out that this is what some French language assistants are told about coming to Scotland! I won’t lie: it is challenging, but challenging ourselves by stepping outside our comfort zone is a common occurrence when trying to learn a new language. Plus, at the end of the day, it is still French, albeit with many strange new phrases like fin de semaine (which they’re very proud of and like to ridicule their European cousins for saying le weekend ), c’est plate (that’s boring) and c’est correct (pronounced corr-eck and meaning the same as that’s good or that’s fine).

The other thing you might have heard about Québec is that it snows a lot there. Let me tell you, words cannot do that justice, so I’ve included some photos to give you a sense of it. The average temperature was around -25C (even reaching -50C one evening with the help of some polar winds. So, bloody cold safe to say (or il fait frette en tabernak, asti! as I would often hear). The beautiful thing about Québec is that even faced with these temperatures and snow levels that would totally shut down most other countries (*cough* the whole of Britain during the ‘snowstorm’ March 2018), life goes on and then some in Québec. I’d safely say the most fun I had was in winter – skiing, snowshoeing and watching live ice hockey matches became part of daily life. 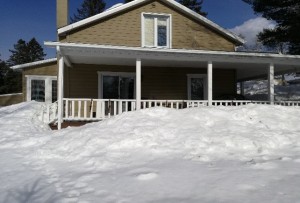 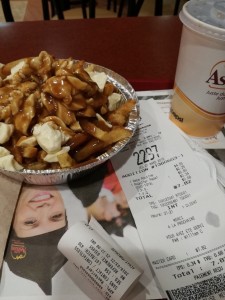 If I was to write about my whole 9 months there, you’d be reading this till the end of next semester, so I’ll leave you with one little language learning victory. To make a long story short, the day in question had been extremely long and exhausting and I fancied a nice big poutine to make it all better (poutine is chips with gravy and cheese curds, and I’ll miss it dearly). I headed to a local fast food place with my heart set on the biggest format – Réguliere. In what I knew was good French. However, when the receipt came back it read: bébé… I knew that this just wasn’t going to cut it so I pointed it out to the cashier. He went into the kitchen (which was right in front of me so I could hear every word they were saying) and I could make out through the huffing and puffing the cashier saying in French : ‘Yeah I know man, it’s just that he speaks French so weirdly’. Normally, I would have brushed this off, but after the day I’d just had I couldn’t help myself. To the two guys and the entire queue forming behind me, I loudly announced ‘c’est parce que je suis écossais’ (it’s because I’m Scottish). I think they’d assumed I couldn’t understand what they were saying, because, after looking very taken aback, they changed the order to the big format at no extra charge! Learning a language pays!

While I wouldn’t quite say I’m fluent in French yet. I can definitely see an improvement from where I was last year and I’m excited to test it out back at Stirling this year. I hope you enjoyed my ramblings about Québec and maybe take some inspiration for where to go for your ELA year (which I highly recommend doing of course). Merci, et à la prochaine!’

Many, many thanks to Stuart for the fantastic blog post – we’re delighted to hear that things have gone so well and hope that you won’t miss the poutine too much when you’re back in Stirling…