And after Alex’s recollections on the start of his language learning, it’s over to Natalie, who is also in her final year, studying International Management with European Languages and Society: 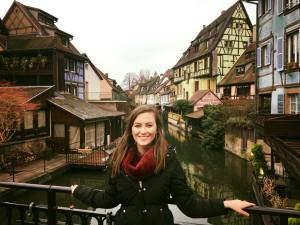 ‘I started my language learning journey at nine years old where I had the opportunity to learn French which was a compulsory language at my primary school. I would say that I was initially inspired by visiting foreign countries with my family at a young age which motivated me to want to be able to learn a few phrases to speak in the local language. After learning the basics of the French language, I realised that speaking a language has many advantages and I decided to continue my language learning at high school where I also choose to study Spanish.

My secondary school (St.Modan’s, Stirling) highly promoted language learning by exposing pupils to language events and school trips in different countries which further inspired me to continue learning both languages until my final year of school. At the age of 17, I decided to do the Scottish Baccalaureate in Languages which involved a project focusing on the differing attitudes towards learning foreign languages in Scotland, France and Spain. After carrying out research, I discovered that there were alarming trends emerging within the UK concerning the decline of students committed to learning a foreign language and I became interested in changing perceptions of language learning. For me, foreign languages open up new horizons and the ability to speak French and Spanish has enabled me to become more culturally aware and more open-minded. In addition, I hoped to expand on this research, develop my passion for promoting languages and enhance my own linguistic skills at university.

One of the main reasons for continuing to study both Spanish and French at Stirling University was to be able to use the language in real life situations and to eventually become fully immersed in both French and Spanish culture. Without a doubt, deciding to study languages at university was one of the best decisions I have ever made and it has become more than an academic subject. The ability to speak French allowed me to study at a French business school where I made some lifelong friends. It also enabled me to become more confident as a person and more aware of cultural differences. 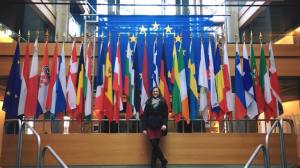 Furthermore, speaking Spanish allowed me to live and work with Spaniards every day during my role as an English Language Assistant in Spain. The language enabled me to understand the culture in a way which would have otherwise been impossible and I became fully integrated into the Spanish way of life. Similarly, I had the opportunity to continue my passion for promoting languages by working closely with SCILT in order to promote the Spanish language and culture within a local primary school.

The recent news regarding the decline in students wanting to study languages deeply saddens me as I look back with fond memories at the opportunities I have had thanks to my ability to speak two foreign languages. Certainly, I hope to continue to study languages after leaving university as the advantages of speaking multiple languages go beyond the classroom and they have become an enormous part of who I am today.’

Many, many thanks to Natalie for another great post singing the praises of languages – thanks for taking the time to do this! From our perspective, what has been particularly lovely in the responses from students is the level of passion that is coming across and it’s great to get a chance to share that.