As was mentioned way back in a February 2018 blogpost, these past few months David Murphy has been coordinating a poster tour, called ‘Putting People on Display’, which has visited 5 Scottish HEIs: Glasgow School of Art, Edinburgh, Stirling, St Andrews and Aberdeen. ‘Putting People on Display’ is a pared-down version of a major exhibition, ‘Human Zoos: the Invention of the Savage’, organised by the French colonial history research group, ACHAC, which was held at the Quai Branly Museum in Paris in 2011-12. Three additional posters focusing on the Scottish context were specially commissioned for this Scottish tour. 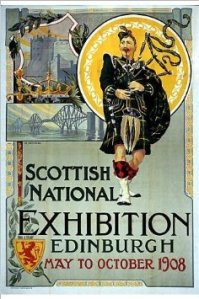 The exhibition is made up of 22 banner-style posters charting the history of ‘putting people on display’. It covers a range of historical periods, geographical locations and national contexts, raises many questions about putting people on display, and the forms of observation these practices involve. Drawing on the rich iconography surrounding the phenomenon, it also forces us to address the ethics of display and the extent to which access to often challenging imagery is essential to understanding this historical practice and its contemporary afterlives. The exhibition was developed in association with the Lilian Thuram Foundation, and is part of a wider commitment to understanding the historical roots of contemporary racism – and to contributing to anti-racist education.

Each of the events held in conjunction with the exhibition has been very well attended. We had an audience of 100 at our launch event at Glasgow School of Art, and we organised a series of lunchtime tours in Stirling and St Andrews. Particularly fascinating was an event in St Andrews featuring speakers from the ‘Friends of Saughton Park’ in Edinburgh which was the site of a major ‘human zoo’ during the Scottish National Exhibition of 1908. The park will reopen in May 2019 after a long period of refurbishment, and it is likely that our ‘Putting People on Display’ exhibition will be included in the events to accompany the grand re-opening. So watch this space for more news as plans develop.