About a year ago, the blog ran a series of articles by students who were just reaching the end of their first year studying French at Stirling. One year on, we thought it’d be good to see how things were going so here’s the first of the follow-up articles by Stuart Close who has just finished the 2nd year of his BA Hons in French and Spanish:

‘Salut encore! Now that another year of French at Stirling has come to an end, I’d like to share my experiences of the 2nd year of the course. Overall, the format of the module is the same as last year: Culture, written language and oral. The difference this year, in my opinion, is the complexity of written language and oral. I enjoyed discussing topics that could well come up in conversation with francophones, and complex grammatical structures that although difficult, have had a significant effect on my confidence in speaking French. The culture topics this year have been a good variety – from the experience of French Jewish people in World War 2, colonial atrocities and conflicts; to Quebec cinema and the representation of French Muslims. 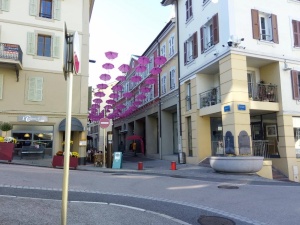 I like to monitor my progress in French in real life settings each year. This year I was able to practice in two instances. Firstly, during reading week I travelled through Switzerland to parts of France near the border such as Evian-les-Bains and St Louis. And secondly, during the semester I had French cousins of my girlfriend round at my flat for what was meant to be just a night. However, owing to the ‘beast from the east’, they ended up staying for the better part of a week, which was an excellent opportunity to practice my French during visits to the pub or even a game of ‘cards against humanity’ which needed to be interpreted.

I feel that the course materials and assessments this year have given me a great foundation for my British council placement in Quebec later this year, and I hope to come back to third year with a solid level of French (and hopefully not too strong an accent!). Au revoir!’

Many thanks to Stuart for taking the time to send us this update and we look forward to tales of life in Quebec over the year ahead – good luck with the ELA!

One thought on “Off to Quebec…”