As promised, following on from Alex’s post about his experiences at Stirling and plans for the future, here is the article Jeanne has sent us about her time in Granada. As well as studying at the University there, Jeanne – who is about to enter Year 4 of her degree in International Management with European Languages and Society – has been working on research on ‘untold histories’ that she was able to conduct thanks to a Stevenson Scholarship.:

“The Stevenson Scholarship has been an amazing opportunity. Indeed, it has made me realize that intercultural research is what I want to do in the future. In order to get a better idea of how Francoism was dealt with in Spain, I was able to combine both archival work, buying books (e.g.: Otras miradas sobre Golpe, Guerra y Dictadura. Historia para un pasado incómodo by Fernández Prieto and Artiaga Rego [2014], Qué hacemos para la Memoria Histórica? by Escudero et al. [2013]…) looking at the various books on the subject in different libraries in Granada (i.e: Biblioteca Pública Provincial Granada), the University library, Spanish media… and visits to numerous “lieux de mémoire” in Granada, Madrid and Toledo. The project has enabled me to have many discussions with friends, classmates, teachers, guides in museums, librarians…thus providing access to different perspectives and opinions. 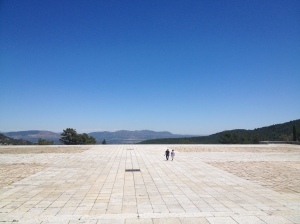 In fact, the ‘Valle de los Caídos’ was the most recurring example given by the people I have spoken to regarding my research project on the ‘untold’ and historical memory. They were furious, ashamed that Franco could ‘rest in peace’ in the basilica of the ‘Valle’ while so many mass graves (‘fosas communes) have still not been exhumed, preventing families ‘the right to mourn’. I therefore decided to go and visit the Valle de los Caídos, (an hour away from Madrid), where we find the tomb of Franco, and which is not presented as a site of memory condemning the dictator’s actions but rather presenting him as a ‘hero’. 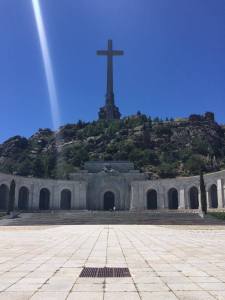 He lies in a beautiful basilica, in a tomb decorated daily with fresh flowers by the monks. What struck me during my time abroad, and which was particularly interesting was the ongoing presence of fascist symbols, imagery. This could be interpreted as the best example of a lack of political determination (‘voluntad política’). For instance, I learned that the economic crisis in 2008 was used to justify the inability to carry on with exhumations (Escudero et al., 2013). This infers the persistence of a Francoist influence at a political level: the past is still too ‘recent’.

Regarding the way the history of Spain is taught at school level, many students told me they did not study the Civil War nor the dictatorship, or only very briefly, the reason being that it was always taught at the very end, and that there wasn’t enough time to work on it. This is comparable with the Algerian War in France, being a ‘late event’. At the University of Granada, the same problem occurred with the course “Civilisation et Culture Française” which taught the entire French history, from prehistory to modern day in one “cuatrimestre” (four months), making it impossible for the teacher to finish the program, leaving aside the most recent events (Colonisation, WWII). The problem seems to be ‘chronological’. However, many Spanish people have told me it is ‘an excuse’ more than anything when I told them about this ‘chronological reason’. The teaching time could be distributed differently: should it be more dedicated to recent, contemporary events rather than spending more time on the Reyes Católicos in Spain, or the Gaullois in France? It is a long, complicated debate. Nonetheless, the Civil War, and the Dictatorship, need to be taught. At the University of Granada, I also took the course “Spanish Literature of the XXth century: theatre and prose”. We were taught key works set during the Civil War, the dictatorship…such as “Qué has hecho hoy para ganar la Guerra?” by Max Aub (1939). Limiting the teaching in courses focusing on defined time-periods could perhaps be beneficial when it comes to recent, still painful events: it could guarantee their teaching. Moreover, my teacher herself (Gracia Morales) said that literature as a means of communicating, teaching historical facts could help as it is not perceived as the teacher’s own opinion, but as the work of an author which is interpreted. I must say that this was my favourite class!”

Many thanks to Jeanne for this update on how things have gone with the Stevenson and the doors it has opened up in terms of this particular topic of research. We wish you all the best for the rest of the Summer and hope this post gives future Stevenson scholars ideas for ways they can conduct their own projects.